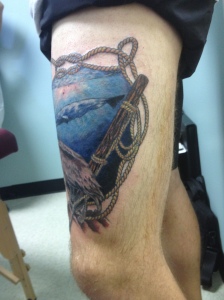 This one was actually one of the last tattoos I did, on a very dear friend of mine and former bandmate.  The quote he sent me (from Moby Dick) as the inspiration for this tattoo was so beautiful, it brought tears to my eyes.  This was one of those dream pieces- where the person tells you what they want the tattoo to represent, what it means to them, and then lets you conceptualize the piece yourself.

I actually did this Crimson Peak piece at Megacon in early March, months before I stopped tattooing.  My dear friend and respected artist, Josh B referred his client to me since at the last minute he would be unable to attend.  She was a blogger and had seen a sneak preview of the film, and was already a huge fan.  I never posted this picture because I was waiting for healed photos.  Working with so much black after I had already completed the details on the face, a lot of that dark pigment seeped into the surface of the skin and muddied all the color in his face.  I wanted to wait to get a picture of the healed tattoo.  The face looks perfect now, but unfortunately a lot of the ink fell out of his glove.  The following picture is how the face looked before the black ink muddied up the color on his face. 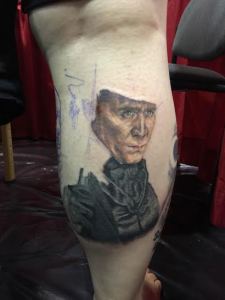 This was done on a young client of mine within the last few weeks I was working.  His mother brought him to me before his 18th birthday to get a tattoo in tribute to his sister.  Before he got this blue rose tattoo, a tribute to his mother, he went and got tattooed by a friend in his friend’s house.  So I spent a good deal of the time while tattooing this blue rose to give him a lecture on being in a rush to get covered in tattoos at such a young age.

This tattoo was one of the first I began at King of the Bay, back in 2013.  One thing about tattoos on peoples’ backs, they can’t see them on a daily basis and are therefor less motivated to come in and finish them.  🙂 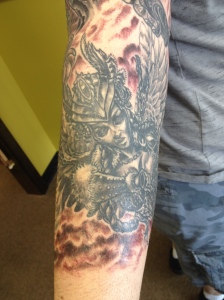 This was another piece that took a long time to complete, but for obvious reasons.  It’s one of my favorites, very fun subject matter.  In my final weeks, I filled in the background and tattooed the ship in the inner arm. 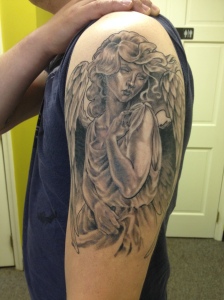 This client got in with me too late to actually get a sleeve, but we did complete several of the components, and now all he needs is some filler.

This was another piece that took a very long time to complete, again, a client who came in in my first few months at King of the Bay.  Her reason for not coming in to finish it was the hardship of being a mom and finding childcare, but also just the fact that she can’t stand being away from her little one.  I get that.

This was the finishing session on a sleeve for a young man, basically encapsulating his values.  This part was for the piece dedicated to the Bible story of Sharach, Meeshac, and Abednigo, who were ordered into the furnace for not bowing to the statue of Nebuchadnezzar.  A fourth figure appeared in the flames, and the guards were ordered to keep heaping more and more fuel into the fire, to make it hotter, so much so that many soldiers died from the heat, but the men inside survived unscathed.

It took me a ridiculously long amount of time to come around to doing this blog.  Largely, I blame my first trimester of pregnancy.  All I seem to have accomplished in the last 3 months is keeping a toddler and a fetus alive.  No small feat, I tell you.  The hormones knocked me out, I felt as if I needed someone to peel me off the floor on a daily basis.  But as I begin my second trimester, I find both energy and mental clarity returning slowly.

As one may have gathered from my post, As the Beginning Eats the End, at the time I decided to stop tattooing, my reasons felt flimsy but my resolve was certain.  My boss, self-appointed “Psychic Ass-hole”, who is rarely ever wrong, told me that if I wasn’t pregnant in 6 months, I’d be back.  And if I did get pregnant, I’d be tattooing again when the kids were older.  I didn’t believe him, but I knew he’s rarely wrong.  It’s one of the many things I respect so much about him.

Yesterday, my friend who has just started tattooing in recent months, after years of being part of the community through photography, posted a status on facebook that reminded me of how I felt those first few years tattooing.  Not getting enough work, not doing enough of the tattoos I want to do.  It’s why I kept waiting tables– I preferred to be busy.  I didn’t realize that the secret to tattooing is slowing down and focusing.  That means using all your down time to study other artists, to draw things that you’re not comfortable with over and over and watch your growth.  To seek out the knowledge of more experienced artists.  To develop your eye for color and composition.  The desire to be busy is a by-product of our fear of being a slave to time.  To create something timeless, you must learn to make time your slave.  This is one of the most beautiful things tattooing has taught me, and it never crystallized into words until last night.

My time tattooing at King of the Bay brought me to a precipice.   I could see my art and my career going everywhere I ever wanted them to go, without limit, if I would only dedicate my life to it fully.  I had finally come to understand the truth about what kind of devotion my craft deserved.  I finally had the right mentor, the right mindset, and years of experience in my corner.

But I also have a very young child– some might still call her a baby– and another on the way.  These fragile years, they go so fast.  These children need so much and they drain the mind and body.  At conventions, my colleagues would often say, “I don’t know how you do it, man.”  I was treading water as a parent and as an artist.  That’s not enough for me.  If I’m going to do anything, I have to do it to the best of my ability.  And if that meant doing just one thing, at least for now, I’d have to do the one thing I can’t abandon.  I didn’t realize that was the choice I had made when I made it.  I made some half-hearted attempts at pursuing other careers before ultimately admitting to myself that this was my purpose, my sole focus… for now.  Being a mother.  Our society places very little value on caring for people, subjugating your needs to those of your family.  It’s all about what you produce, how we serve ourselves.  It wasn’t easy for me to choose to turn my back on that mindset.  When the children are more independent, time will reveal my next great purpose.  And perhaps that will be tattooing again.

I realized I do love tattooing, passionately.  It wasn’t just a means to an end.  I love it so much, I can’t bear to do it half-assed, as mothering the very young forces us to do with everything but that very sacred duty.

Wook at dis schweet bebe!!! Added color to this puppy the other day. Color and outline healed.
I had so much fun with this bright and cheerful little jammer! I can’t wait to see how this color settles in to her beautiful skin tone.
Sweet tribute to her grandfather 💚 #neotraditionaltattoo #floraltattoo #rvatattoo #richmondtattoo @seladytattooers @neotradtattoousa @sinnergtattoos
Here’s another sketch available for a tattoo. Email me and pay booking fee to claim OR click the link in my bio to sign up for the cancellation email list and get notified when I have an opening. 50% of my cut for an entire project begun on a cancellation day goes to Mutual Aid RVA or the social/environmental/financial justice org of your choice. #nature #mushrooms #tattoodesign #illustration #girlheadtattoo
It was a pleasure doing this tattoo. Elephants are covered in wrinkly skin, and I loooooooooove textures like this. Plus, my client was a dear heart, and we share many common interests like mythology and anime.
I thought I posted this cute little guy but I guess I forgot! Loved doing this colorful little beauty.
Loading Comments...
Comment
×
%d bloggers like this: