Recently, I had the privilege of finishing Hannah’s first tattoo.  Originally, she brought me a picture of a sculpted skull with a frog on its head which was hidden in the architecture of a building in one of the countries she had visited on her travels.  By itself, I was excited to tattoo this on her and happy to leave it at that.  Until she told me eventually she would like to work it into a much larger piece dedicated to all the highlights of her travels.

Well, hold on there, I said.  I typically discourage trying to work existing tattoos into larger ones.  It works better as a composition if you think it through from the beginning.  So we rescheduled her consultation so she could compile the images she already knew she wanted to incorporate into her travel piece.  Knowing she had more travels in the future, we determined that each piece could stand for a different period of her life.  She left the images with me, I showed her some reference material I had that I was interested in using as inspiration for her tattoo, and we pinpointed exactly how she wanted it to turn out, with what knowledge I could supply her about what works for a good tattoo.

It turns out that besides sharing my wanderlust, we also share a love of health and mindfulness.  In this video, taken just before we started her outline, we discussed using visualization as a pain-management technique.

Several weeks later, she came in to get the color, and the client I had scheduled after her happened to call out sick that day.  Thinking we were going to have to split up the color into a few sessions due to time and money constraints, it turned out she had exactly what I estimated it would cost to finish the piece.  Fate, it seems, had designs on the completion of this tattoo in a more timely manner than anticipated.  So, here she is, the final product. 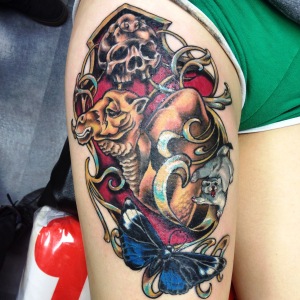